RATE YOUR SPOT IN ATL

LEAVE A COMMENT IN THIS SECTION OR VISIT OUR BLOG TO LEAVE A RATING IF YOUVE VISITED ONE OF THESE FINE ESTABLISHMENTS IN THE CITY OF ATLANTA.

FIRST ON OUR LIST OF GREAT PLACES TO EAT AND MEET FRIENDS FOR SOME GOOD FOOD AND A LAUGH IS SIX FEEL UNDER.

Both locations of this easy-going tavern offer amazing views, but the Westside spot is our favorite. The still-developing neighborhood has welcomed a host of frou-frou restaurants and bars and beautified some of the crusty old brick buildings that sat unoccupied for decades.

There’s something great about wearing whatever the hell you had on that day when you arrive, and not paying ridiculous money for a glass of whiskey. Still, when it comes to the expansive view you get of West Midtown, Midtown, and — depending on your eyesight — Downtown and beyond, you can’t feel much more alive than th

When the mercury rises, take a cue and elevate your dining and drinking too. The springtime pollen and intense summer humidity mean there are times when Atlanta’s alfresco options are limited, but when it’s good, it’s real good. These restaurants and bars all have something to offer, from mellow neighborhood vibes to sky-high views, poolside sips to historic vistas. 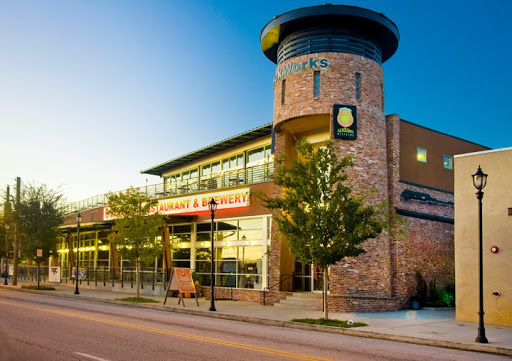 5 Seasons Westside: The Westside outpost of this local brewery pours its own beers as well as a few other suds, and turns out a hearty selection of gastropub standards, including some dishes using beer or spent grains left over from the brewing process. At night, the deck gets crowded when the young creative-professional crowd takes off from work — but if it’s too hot, the lack of shade can make for an easy table to grab.

The view: Scope out the once-industrial Marietta Street corridor or Midtown in the distance, or watch the mad valet scramble at Bartaco and Bocado across the street.
Must-order: The servers and bartenders are knowledgeable about the wide variety of beers on tap and by the bottle. Let them guide you by telling them your tastes.
Insider tip: Park behind the building in the attached parking deck to minimize your hassle. 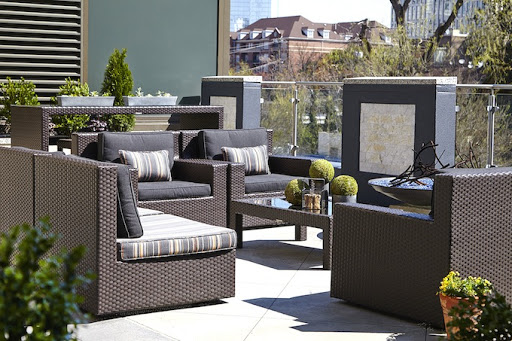 The Garden at Community Smith: The restaurant at the Renaissance Midtown hotel is the upscale New American Community Smith. While you’ll find a handsome bar and dining room on the main floor, the tucked-away rooftop space also features bar bites, cocktails and a loungey layout with lots of greenery.

The view: You’re mostly overlooking West Peachtree traffic, but look up and across the street to glimpse the old Biltmore Hotel signs.
Must-order: Ingredients change with the seasons and so do some of the drinks — grab an old fashioned made with blood-orange juice if it’s on the menu; it’s a successfully subtle riff on the classic cocktail.
Insider tip: The daily brunch items are a weekday pick-me-up. 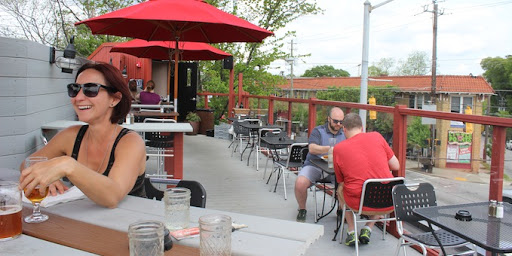 Little Five Points Corner Tavern: Taking the opportunity after a 2013 fire gutted this neighborhood favorite, the owners renovated, refurbished and renewed. One of the benefits? A stellar new rooftop space, great for taking in the beats of the ever-present L5P drum circles while remaining high above.

The view: Little Five’s always drawn a diverse crowd, making for great people-watching.
Must-order: The Carpetbagger is an especially over-the-top burger — order it if you’re up for a challenge.
Insider tip: Brunch is served on Saturdays and Sundays, and the mimosas? They’re bottomless. 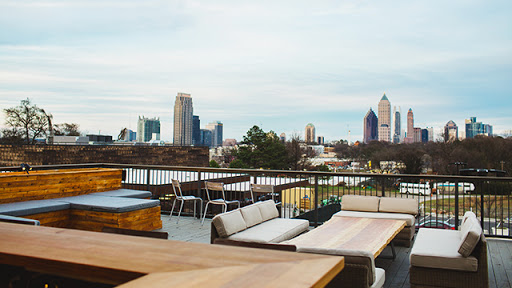 When this Charleston import arrived a little over a year ago, much of the hype was for its top-notch sushi. But the current buzz, now that the weather’s fine, is about the rooftop bar. You’re only on the second floor, but we take what we can get in Atlanta.

The view: Look to the east for the Midtown skyline (shield your eyes from the blinding parking lot lights below for a better view, if you’re there at night).
Must-order: The Peaceful Warrior cocktail combines mild tequila with sparkling green tea and other flavors well-suited to hot temperatures.
Insider tip: Along with drinks, the bar has its own sushi menu, a pared-down version of what’s available downstairs. 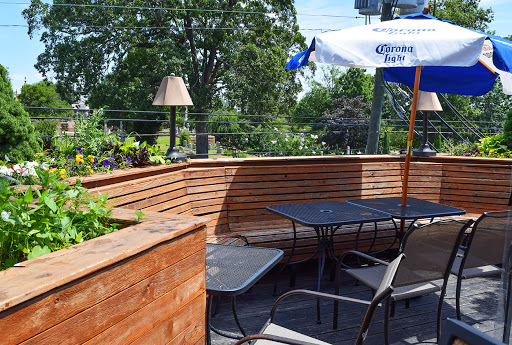 Republic Social House: This Grant Park pub has wooden banquettes furnishing its nice outdoor deck, plus TVs for those keen on getting sun without missing the game. “Dirty South Trivia” takes place on Thursdays, while DJs provide the tunes on the weekends.

The view: Memorial Drive may not be the most scenic of streets, but go two stories up for a peek into historic Oakland Cemetery.
Must-order: Among the creative bar fare, there’s a number of sizable flatbreadsthat are great for sharing.
Insider tip: Hang a quick right when you enter and head straight upstairs. 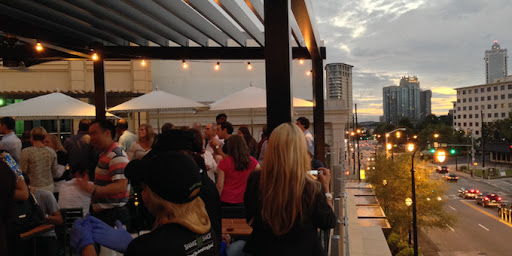 Shake Shack: Atlanta’s taken to this NYC burger chain, and it’s not just because of the patties, fries and shakes. The Buckhead outpost features a solid roof deck too, making for a respite from the upper-crust shopping hubbub below.

The view: Gaze across Peachtree to see what’s new in the neighborhood — the massive, multistory Restoration Hardware store/fortress, for instance.
Must-order: Unique to this location, the peach milkshake’s a must.
Insider tip: Don’t want to hoof it up that serious staircase? Take the elevator to the roof. 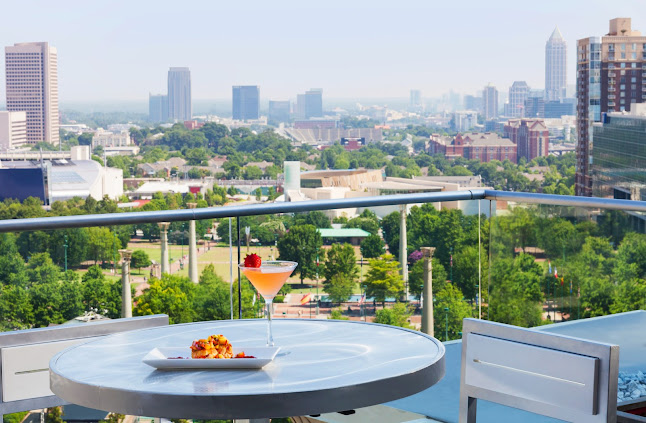 SkyLounge: Up top at the historic Glenn Hotel in Downtown’s Luckie-MariettaDistrict, the chic SkyLounge is among ATL’s more well-known rooftop spots, even if it doesn’t stir up the same local buzz.

The view: A terrific view of Centennial Olympic Park and the Atlanta skyline makes this one tough to beat.
Must-order: The bar’s signature lemongrass cocktail is herbaceous, tart and refreshing.
Insider tip: Hungry? The hotel’s restaurant, Glenn’s Kitchen, is open late.

Wetbar: Atop the W Downtown you’ll find this all-weather pool bar. The crowd veers more toward the business set, although the hotel has its fair share of wedding parties and large groups as guests.

The view: A panoramic Downtown vista offers a look at (and into) neighboring buildings, the Georgia Aquarium and the newly constructed National Center for Civil & Human Rights.
Must-order: Go for something bubbly to match the sparkles of the city skyline.
Insider tip: Want to work out before the weekend DJs set up? Wetbar offers barre and yoga activities some mornings.

Whiskey Blue: Two outdoor terraces 125 feet above street level boast swanky yet understated banquettes with curtains that can close for privacy or open up depending on the party atmosphere. The vibe is upscale, with much of the clientele coming from the adjoining W Hotel.

The view: This high up you can take in much of the city, and it’s a particularly sought-after perch whenever nearby Lenox Mall has holiday fireworks displays.
Must-order: A breezy spot like this on a warm summer evening begs for a caipirinha or mojito, though as the bar’s name indicates, a fine selection of whiskey is also on hand.
Insider tip: If you’re staying at the hotel, ask the concierge if they can snag you a reserved couch or cabana. 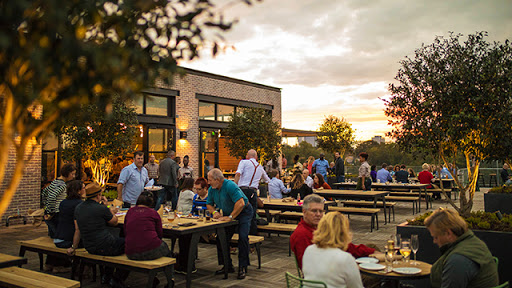 9 Mile Station: The food hall at Ponce City Market has the city pretty excited, but in recent months the buzz has been all about the building’s rooftop. The indoor/outdoor beer garden gets its name from the historic nine-mile circuit a streetcar once traveled to make a loop from Downtown to Virginia-Highland more than 100 years ago.

The view: The PCM rooftop offers commanding views of Atlanta’s three separate skyline clusters (Downtown, Midtown and Buckhead). Sunset’s particularly pretty, as the sun dips down behind Midtown to the west.
Must-order: Inspired by biergarten fare, the menu offers some terrific pretzel and sausage varieties.
Insider tip: Lunch and dinner reservations are only available through the online booking system, Tock — the same used by Staplehouse — and require a deposit ranging from $15–$30 per person depending on time and day. The amount is fully credited to the final bill. Walk-ins are also accepted from Skyline Park, the amusement park atop PCM. 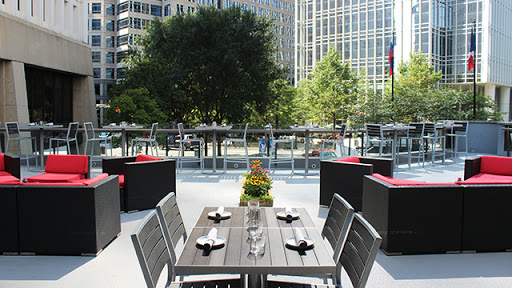 5Church: When the lively Shout closed here at the end of 2014, Midtown lost one of its most popular hangouts. But when this Charlotte import helmed by Top Chefcontestant Jamie Lynch opened last summer, all eyes were on the expansive rooftop space. It opened a little later than the restaurant, and now boasts walls covered in vegetation, comfortable, recline-ready sofas and its own bar.

The view: You’ll be eyeing Peachtree Street and pedestrians on their way to and from the High Museum.
Must-order: The Viper, made with silver tequila, orange liqueur, lime juice, cucumber water and cayenne pepper​.
Insider tip: Peek behind the doors next to the upstairs bar for a glimpse of 5Church’s event space, which the restaurant rents out for private functions and get-togethers (patio included).

WHAT YOUR STATUS IS/ STATUS

WE OFFER THE BEST MARKET PRICES ON CERTIFIED FINE JEWELRY

LMG WHERE WE DO MUSIC/FILM/FASHION

WE OFFER THE BEST MARKET PRICES ON CERTIFIED...

ATL MUSIC IS IN STUSH STYLES